We had a couple nice days for some Columbia River salmon fishing. Days are getting shorter and it’s getting colder at night, the beautiful long summer days of the Pacific Northwest are pretty much over. Over two days of fishing, I caught two fish, which is about average for a decent fisherman. You always hope to do better, but some days the fishing is not as good. If I knew why, I would be a millionaire, but I don’t know why so I’m not a millionaire. One of the fish was a wild Coho salmon, maybe about twelve pounds, that was released, so another day of catching fish but not keeping fish. The other fish more than made up for it because it was a large hatchery Coho salmon. This is the biggest fish of the year so far, easily twenty five pounds. It’s right up there on the all-time big Coho salmon list as well. 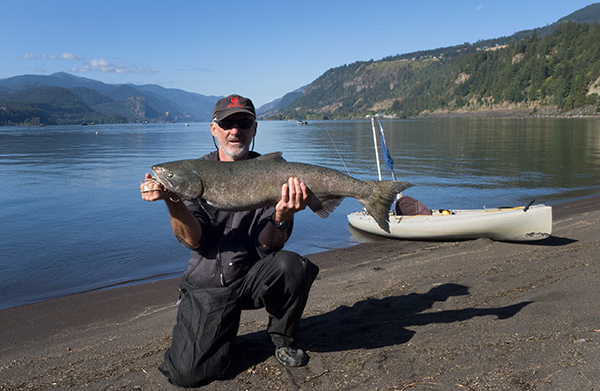 It’s hard to tell if the fishing is slow or if the fishing is just slow for you, but the fishing sure seems slow. You can always see salmon surfacing and jumping, but that doesn’t mean you are going to catch them. In a day’s fishing, you may get “bumps”, where a fish bumps into your lure or makes a half-hearted strike. Sometimes, these “bumps” may result in a foul hooked fish. Then, you might get a couple hookups, but lose the fish somewhere along the line. Netting a big fish on a kayak is not an easy task, you may lose a fish or two like that. You can also be like me and lose fish by fooling around with cameras. Anyway, when there are fish jumping around and nothing else, that’s a slow and somewhat tortuous day of fishing.

A check of the annual fish counts shows there is reason for the slow salmon fishing. The fall salmon run, both for Chinook and Coho, numbers are very low and falling off quickly; not a positive sign if you plan on doing any salmon fishing. The Chinook salmon run may wind up under the ten year average. The number of fish coming over the Bonneville Dam is dropping more quickly than the historical norm as well. The Coho numbers are down from the ten year average, but similar to last season except for this year’s extra quick drop off. I’m glad we got out there as soon as possible because it’s looking like a challenging salmon fishing season ahead.

We will get back out there as soon as possible because it may be a short season. Looking like this weekend could be the last nice, summer-like weekend of the year, so it will be insanely crowded. Have to wait until next week but we will be out there first thing.