When you can go kayak fishing for salmon on the Columbia River for a few days in a row, that’s a pretty good run. The wind here in the Columbia River Gorge is rarely calm for consecutive days, so we considered ourselves extremely lucky to get an entire week of calm wind and nice weather that happened to coincide with the peak of the fall salmon run. We were fortunate that we were able to go kayak fishing for salmon in the Columbia River for five days in a row with conditions that could not have been much better. Pretty close to a once in a lifetime experience for any fisherman.

I caught a big Chinook salmon late last week, so I was really looking forward to more kayak fishing. The first day out, I caught three salmon, all native fish, that were released. The streak of wild salmon continues. For sure, the reason I go fishing is because I like to fish, but having a few fish to put in the freezer is kind of nice. Still can’t beat the action as far as fresh water fishing goes.

The second day had some big time salmon fishing action. The fishing was really good. I caught five more wild salmon; three Coho and two Chinook. I can’t ever recall catching so many native fish. I also had two more salmon came unhooked just as I was getting ready to use the landing net. They both looked like hatchery Coho salmon and one of them looked like a twenty pounder. Really starting to wonder what the heck is going on.

On the third day, I caught three Coho salmon. Today things went my way and the two largest fish were keepers. I was limited out, off the water by 8:00 AM. The photo is pretty bad because the sun had not come up over the Cascade Mountain foothills, so it was still dark in the shadows. 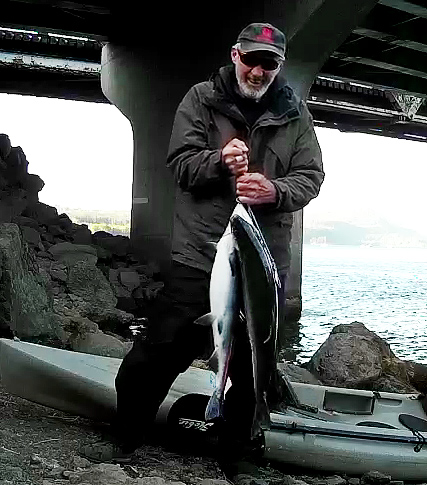 The fourth day was a long day of fishing resulting in zero fish. One fish, if you count a foul hooked smallmouth bass. A great day of fishing followed by a skunk. That’s how salmon fishing goes. Some days you get them, some days you don’t.

This salmon fishing is more than putting a line in the water. We have to get up at 3:00 AM to be out on the water at sunrise. Almost all the fish so far this year have been caught before noon, so that’s what you have to do. As the days get shorter, we won’t need to get up as early, but there is less fishing time. We have to hump the kayaks and gear down a steep, rocky cliff/hill, in the dark. After fishing, we have to haul the kayaks and gear up the hill. When we get home, all the gear is hung out to dry. If we’ve been lucky, fish are cleaned and eggs processed. Pack up all the gear for tomorrow, have something to eat and hit the sack early.

Long fishing days and big fish are tough on fishing tackle. One of my spinning reels needs to be repaired and hooks on lures may need to be changed daily. This is what is left of a size 4 Eagle Claw treble hook after a twenty pound salmon got done chewing on it. 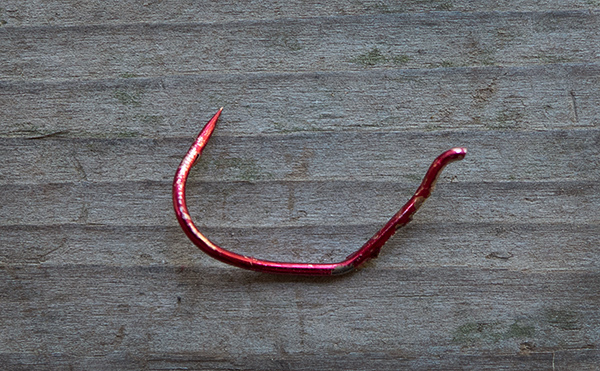 Last day; what are we going to get? After a couple hours fishing, it was pretty clear that the salmon were not going to be jumping into the kayak. Another tough day as far as catching fish goes. The fish are there, you can see them jumping around, but some days they just don’t bite. After a long week of fishing, I almost packed it in, but as the first weekend fishermen started to filter onto the river, I had the first and last hookup of the day; a silvery Coho salmon. The “one last cast” philosophy pays off again, guess that’s why I always stick with it.

After five straight days of salmon fishing adventure, I’m pretty tired. Caught a lot of salmon and kept a few. We did not get a lot of video and photos because most of the best fishing was early in the morning when the lighting is bad. We also like to catch a few fish before we start losing fish by fooling around with the cameras. Now that the empty freezer is starting to get filled up, we will be more inclined to try getting some footage and photos. 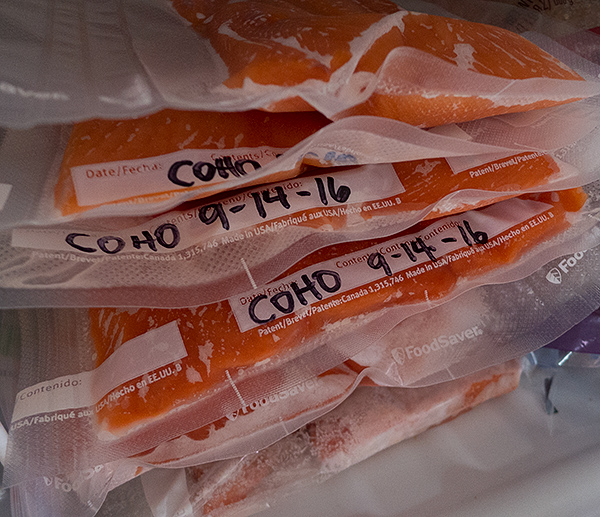 After a perfect week, today is rainy and windy. Man, we were so lucky. Salmon fishing is fully under way and we will be out there every day we can. Stay tuned, or get out there yourself.