The first fishing trip of the year did not go so well for the fishermen, but the second trip evened things out a bit. Even though it is still very early in the fishing season, we managed to get a couple big smallmouth bass.
The water in the Columbia River is still pretty cold, maybe the low fifties in most spots. What we look for are backwaters and eddies where the water is a little warmer. 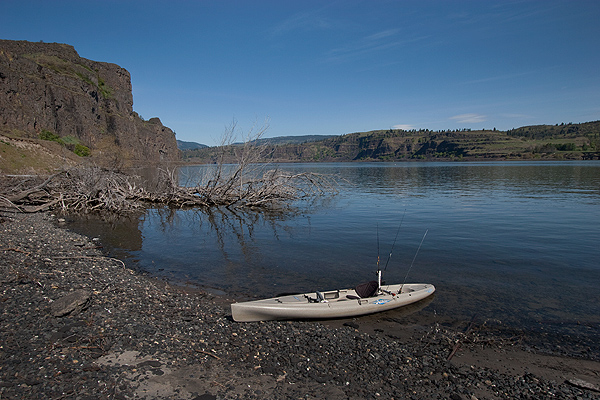 With the melting snow, the water level, temperature and current are constantly changing depending on which part of the river you are on and how much water is being released from the nearest upstream dam. While the “real” smallmouth bass season begins in a week or two, when the water is on the cold side, only the big fish are moving. You might not catch many smallmouths this time of year, the ones you catch are likely to be pretty good sized fish.

Typical for this area, after a couple days of calm winds, we are back to the normal 15-20mph Gorge wind, too windy for kayak fishing on a big river like the Columbia. Trout season opens in Washington this weekend and Oregon is stocking their trout fisheries for the large number of fishermen that go after the Pacific Northwest’s most popular game fish. 2013 fishing season is off and running!