After today, it’s would be perfectly correct to label me a complete and total fool. I don’t really like shopping in stores, especially “big box” places, but against every shred of reason and logic, I decided to go to the Black Friday sale at Cabelas Outdoor Superstore in Tualatin, Oregon, which is basically Portland. I’ve been mainly satisfied with Cabelas’ products, mostly outerwear, boots and fishing stuff and have spent a lot of money there, but I’d never been to a Black Friday event and have zero interest in participating. Tempted by the Black Friday ad, I called Cabelas on Wednesday before Thanksgiving and told them I didn’t want to drive all that way for nothing. The Cabelas representative told me the items I was interested in were well stocked and expected to last the entire weekend. I live in a fairly remote area with not many stores around, so when I saw a number of things I wanted but can’t get locally at a fantastic price, well, I couldn’t resist.

Long drive to Portland; to get there about 4:00AM, I left at 2:00AM to go to a friggen store. When I got to Cabelas at about 3:45AM, there was already a long line of people, some who looked like they had been there all night. Got out of the truck and proceeded to stand in line in a strip mall in sub-freezing weather for the privilege of entering a retail establishment. Bizarre. I wasn’t alone; within a half hour, the line to get into the store easily doubled in length. 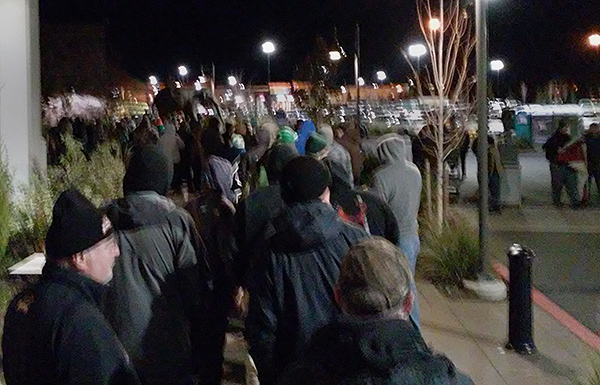 About a half hour before the store opened at 5:00AM, bundled up Cabelas employees came out handing out numbers and “gifts” for the first six hundred people in line. I got a $10 gift card, a girl next to me won a weekend trip. I’ve got $10 and I’m actually not far from the beginning of the line, number 365. I’m beginning to think I may have been wrong about Black Friday sales and people actually get great deals! 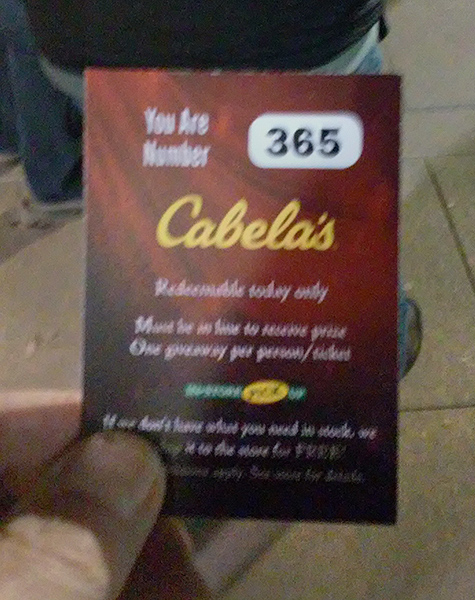 I got into the store about ten minutes after opening and moved quickly through the mob to the counter to get what I came for. “Sorry, out of stock.” OK, item number two; “sorry, out of stock”. This was repeated for all the half dozen items on my list. These things were common outdoor-type items, I could have got most, if not all of them, at any WalMart in metro Portland, albeit at a higher cost. So, ten minutes after the “sale” starts, 375 people in the store, everything that anybody wants is sold out. Tough shit for me and the 700 or so people in line behind me. Cabelas deliberately short stocked all these items to suck people into the store and steer them to stuff they were trying to get rid of.

So, I’m the fool. I should have known better. All Cabelas family run, flag waving marketing is a bunch of BS. It’s just another big corporation with Chinese stuff and minimum wage employees. Cabelas lost my trust and my business today, although I’m 100% sure they don’t give a damn about me or any of their other customers.